This post started as the What Color to Paint the bedroom one then morphed into something completely different.  There is just SO MUCH TO DISCUSS in the photos I have of my bedroom

For the longest time, I shared a bedroom with my brother.  I mean...probably later than should have happened. Eight or nine years old?  Then AND I SWEAR THIS IS TRUE my dad's solution was to get a sketchy camper and attach it to the house. With the door entering into my room, with a poorly-constructed plywood hallway.  That was my brother's bedroom for about a year. If I remember correctly it didn't have power or heat.  A clearly well-thought out plan.

A person forgets sh*t like this happened. Probably for good reasons.

So, now here is the only mine, teenage version of my room.  The walls are bright yellow with primary green carpet because just a few years prior to this photo I wanted walls like the sun and carpet like the grass. (I can't decide if that's charming or a metaphorical sign)

Prior to this, it was primered wallboard and old linoleum and carpet samples.  What better evidence of growing up poor and unparented. 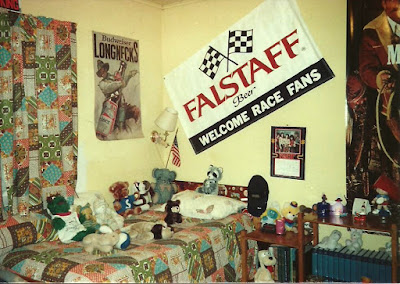 Okay, so much to unpack here.  Like those paragraphs weren't enough.

The beer sign was stolen from a racetrack in Alberta Canada by a boyfriend.  The Marlboro and Longneck posters I just thought were cool. They weren't stolen...I think. I didn't smoke but I did drink.

I have a pillow case exactly like the one on the bed. I just realized that.

The hat on the bedpost was from the same boyfriend as the poster.

I'm ignoring the existence of the RATT calendar.

Stuffies and tchotchkes everywhere. Good lordt.  The OCD lining them along the wall makes me laugh.

Stuffies: the creepy pillow creature in the corner was a do-it-yourself stuffie from my grandma. Oscar was because I loved Sesame Street. Odie because he was A.D.D. just like me.  The hugging dogs was from the same boyfriend as the hat and the sign.  I didn't realize the lack of closure there until I really looked at this photo.  We had been broken up almost a year, I think.

The bedding was my brothers.  I took it after he moved out at age 17.  It replaced a knock-off, highly flammable, Holly Hobby-ish bedding set.

You can barely see it but there's a No Parking sign above the window.  Because my brother accidentally rolled a 1969 Plymouth Barracuda convertible into my bedroom.  I was reading on the bed when it happened and moved just in time.  (see? you think I'm joking about traumatic childhood.  Oh No, I am so not) 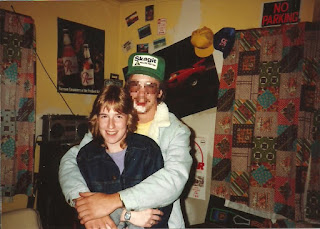 Here you can see the damaged wall behind me on the right.  Dude was just a friend, despite appearances. He was lost to time and a psycho ex-husband.  He saved my life once, literally.

My GOD with the beer posters.  So much redneck and no parenting.  I was SEVENTEEN f.f.s.

The requisite 1980's boombox on the dresser.  I had it until just a few years ago.  It was the BEST.  I wish I knew what cassette was in there.  AND: CASSETTE!!! 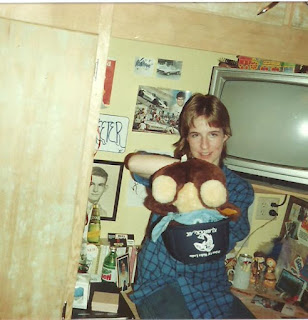 If you know me in reals now, you might be surprised by the OMG CLUTTER.  I call it being a teenager with unaddressed A.D.D.

Television with non-parental controlled cable channels.  Because: of course.

Mountain Dew in a glass bottle.

What you can't see is I had books everywhere. Teen fiction, adult fiction, text books, the previously mentioned encyclopedias. There's probably a royal blue backpack full of textbooks and homework on the floor.

Unless friends have photos that I don't know about, these are the only photos of me from that time period, other than school portraits.  Funny/strange at just how many stories these photos tell.  Unfinished relationships, an ex-husband, rocky childhood, learning disabilities/mental health.  It surprised even me, looking at them.  And I was there.

What stories would childhood candid photos tell about you?