I am now amending that title to "Three Days or Less..."

By the time we arrived home, it was bucketing down rain.  I ran into the house, let out Lucy, and opened  both doors wide so we could get the chairs inside.  Kevin's chair could come in via the mud room but my chair was larger so it had to come in the main door. Because why not. Lucy was excited that we were home, all the doors were open, and Things Were Happening; adding to the frenetic pace of the afternoon.

My chair came in first and I had The Anxiety.  The chair is larger.  It's new. We have to rearrange furniture.  OMG. What have we done to our cozy house?   Kevin noticed me beginning to spin out and suggested moving just one end table while he got his chair out of the truck.  He also had to tell his dad that we didn't need his help; which disappointed his dad a little. But the last thing we needed was an 84-year-old man with memory and speech issues "helping" move furniture.  So between me, the dog, and his dad, he also had his hands full.

In an attempt to gain any sort of control in my brain, I moved one end table down into my office, Thusly smashing my hand in the process; Day Two of the New Year and I already have an injury. Seems right on time.  This also caused a lamp to be removed and because it's me: books.  All of it went into my already messy office.  We are ignoring that matter right now. (and at the time of this writing, if I'm being honest)

This is where I realize that I DO have a smaller end table. It was that table my mother-in-law sent over months ago that I whined about having to keep.  In a zippy twist, it's perfect for the room now.  It has a DRAWER.  It has a mate if I want to find a different table for the mud room.  Sometimes things do work out, even when you don't want them.

Kevin came into the house, put his chair down then went back outside to close the truck up and put it away.  I moved his chair into place and it fit exactly where the old chair used to was.  In a rare instance of thinking ahead, we had dropped off the old chair to the Nephew.  And of course Kevin's chair fit perfectly with no fuss or fanfare.

He returned to the house, finding me sitting in my new chair and spun dafaq out.  "Okay, we have to move the loveseat down.  We need a smaller end table.  This is going to take some doing."  Thank you, Captain Obvious. You're not helping.

He sat down and looked at the space.  He was the one who arranged all of the furniture when we moved into this house. He has a better eye for things than I do when it comes to big picture.  He suggested taking out a bookcase and was met with a raised eyebrow.  This lead to "We need that corner but the china hutch is there."

But the china hutch is there.  Again, a china hutch is ruining my life. This one is mine, built by my father-in-law, and full of our own stuff.  Being rid of this one is not an option.  "Okay, well, it sucks" I say  "But we can move it." This is where Kevin pauses.  Kevin never pauses.  I sense impending doom.  I am right.

I laughed "You said I didn't have to!!"  He laughed because: of course.  Then he followed with "Do you have paint?"  Of course I do, I said.  We'll shelve this detail for a minute.

I skimmed over the thought of painting for now  "We move it to the opposite corner.  We move the bookcase to where it was. We move the loveseat down and we're good."  Deep sigh.  This wasn't supposed to be a THING.  It was supposed to be one chair.

He looks around and eventually says "Yeah."  I sat there, silent.  Thinking. Regretting all of my life's decisions.

This is where I mention that the Christmas tree is still up.  Fully decorated.  I wasn't going to take it down until "after the new year" which it technically was. I also threatened to add a day to it's existence every time Kevin asked "When is the tree coming down?"  The plan was to take it down on Inauguration Day or whenever it started bothering me.  Apparently that day is today.

"Okay. How do you eat an elephant? One bite at a time.  Or: you just start."  I stood, silently planning how I'm going to move that #$%^ china hutch.  I turned to Kevin, pointed at the corner "But I'm not painting that today."  Sensing the potential for bodily harm he said "Okay" then went outside to get tools.

I began defrocking the tree.  Usually I do this slowly and with care; removing all the ornaments then wrapping them up into a large tote.  Not this year.  I laid out a bath towel, filled it, then carried said towel to my desk.  Repeat three times.  And yes, my office is still FULL of haphazardly stacked decorations.  And now an end table and lamp.  This is going So Well.

Fifteen minutes later the tree is down and now I'm working on emptying the hutch. It's contents were quickly stacked on the dining table with all the books from the bookcase that I unloaded first for some reason.  What do I need to move next?  The bookcase.  What do I need? the books.  Tactical Error #I can't even count now.

Next Kevin has the hutch unbolted from the walls and is moving it.  I kept saying "Use the slidy things" and he kept trying without them.  The slidy things are a gift from the gods. GET THEM.  They have saved me many, many times.  (Slidy things)   Finally he relented and tah dah!  I was right.  A bit of wrestling and Kevin bolts it into its new home.  We are super committed now.

I began to replace everything into the hutch when Kevin says "Why do we even have all this stuff?"  Deep breath, rolling of shoulders "This is our history. The history of us. And we're not going down that rabbit hole right now."  Then he noticed some model cars he forgot about and he's distracted again.  Thank you tiny baby jesus.

I had set a goal of being done at 5:00 p.m.  That gave me a little over two hours to put this mess right.  I'm happy to say that I was finished, mostly, at 5:15.  I can't move about my office freely but the living room looked good.  Well, except for the wall that needed painting.

Now I'm on Sunday.  The plan was to put everything away in my office Sunday morning then paint while watching the Seahawks play.  It's now Monday morning and my office remains a holiday dump site.

What had happened was I woke up 100% Uninterested in putting stuff away.  I came into the office and wrote this instead.  Then there was lunch.  Then the game started.  So I broke out all of the paint stuff and began to paint.

Firstly, I was pretty sure I didn't have enough paint but historically I under-estimate how much I need.  I poured out the paint, knowing that it was the lighter color from my failed painting experiment in the bedroom.  I thought that maybe, just maybe, it wouldn't be light enough to be a thing.  I know, shush.

It was a thing.  Because of course it was.  I painted a bit, hoping that maybe it wouldn't be so noticible once it dried.  It was. 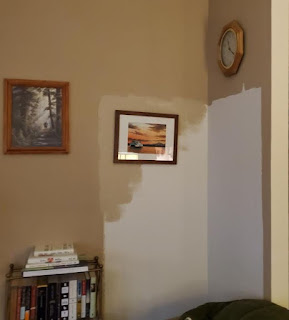 Then Five came over because his daddy was helping next door.  We sat and talked for half hour then there was a knock on the door.  It was the Niece, stopping by to say hi because we haven't seen her in months.  (masked up, stayed in the mud room while I stayed in the kitchen)  Now an hour has gone by.  The Seahawks won and it was time for dinner.

I was happy to have a cozy chair to sit in while I read and ignored the mess that is that wall. And my office.  This is also where Kevin offered to help "put things away"; which was answered with a quietly panicked "Nope."  Because "putting away" would be "Why do we HAVE THIS STUFF" and I can't even with that right now.  Because Why DO We have all this stuff?

Then I woke up at 2:00 am, full of a plan to get all.the.things. done today.  It's almost noon on Monday and I've checked in with my job and wrote this.  Lucy has stolen some packing paper and properly sniffed everything, finding it uninteresting.  Same, gurl, same.

I have to go pick up groceries soon and buy paint.  I have to work but literally and figuratively can't get to what I need right now.  I'm on my second cup of coffee and still *looking around* no motivation to be found.  Maybe it's under the stack of ornaments. (there are words that shouldn't ever be strung together)

But I promised Kevin that this mess I've created will be gone when he's home in *checks watch* six hours.  Probably.  Maybe.

That chair IS pretty cozy.

This is so great. It WOULD be raining. If you hadn't started painting, I would have suggested pretending that different-colored place was on purpose, maybe put up a little fake frame around it, really LEAN INTO the big white spot on the wall.