You're Doing It Now

I used to hate the quote "Don't argue with a pig because you both get dirty and the pig enjoys it."

Secondly, the trill of annoyance/injustice that goes up my spine when someone is purposefully contrary is a thing.  In the last few days though I have gained a deeper understanding of that saying.

I've watched the tug-of-war between "Can't we just move on?" and "Why won't you learn?"  and have genuine and definite fear for the future.

Here are some interesting examples that have happened over the past 48 hours on the social media:

I would like to conduct an experiment that I hope will birth a constructive debate in the future.  I would like my friends from both sides of the aisle to respond with 2 items.  First, the most important and pressing issue on your mind and second, a issue that you believe may be important to someone on the other side that you would personally be willing to compromise.  RULES to respond:  Only list 2 responses, I am not asking for debate at this time, no responding to other peoples post, be honest, I want this to be a sincere safe place to put issues on the table.  Why am I doing this?  I genuinely care about what my friends think and are concerned about and tough conversations need to be had at this trying time and well I might as well be the one to start them.  I also believe there will be a lot of common ground among us that sometimes gets looked over due to all the background noise of politics.  Please post by the rules... If anyone attacks anyone for anything they post, I will delete it, this is a simple task to find out what is important to each other, not a debate, if you wish to debate please do so on your own page.

At first I was interested. I thought it was brave to ask; I also thought it was a fool's errand. Nonetheless,  I thought about what my possible response would be.  Then I scrolled to the answers. Of course the most strident belief set answered first. These are folks who don't normally comment on his page suddenly they have things to say.  This disingenuity is exhausting.

Their responses were consistently Constitutional Rights.  #merica  The third response to what they would compromise, I kid you not, was: Completion of the wall %100  Sigh.  Seriously. That is so 2016.

Then I scrolled to another friend's page and watched as a friend rightfully called out someone for being hyperbolic and parotting untruths.  The person, unfortunately, is a misogynist so it degenerated to "I can't talk to miss high and mighty" tones. Sitting on the sidelines, I just wanted to message the friend and advise her to stop engaging with the troll.

This brings me to this: stop feeding the trolls. I've watched smart people fall into the mud in attempts to educate or bring to light untruths, only to end up on the same muddy footing as the person they were "talking" with.

I'm very careful with what I post on the facebook.  I try to stick with puppy photos and funny quotes.  I purposefully don't want to be the person who posts "I know this will offend some but I'm posting it anyway."  That is a particular kind of immature dickishness.

Here is the difference, in my humble opinion, between one belief set and the other on social media:  One is strident and willing to say or do anything in order to "win."  The other - also strident - has good intentions and expectations of consequences.  This is very simplified, I understand.

When something like the insurrection occurs, it is impossible for me to not acknowledge it.  I found this quote from Pete Buttegieg and it resonated with me:

Words have consequences, especially the words of a president and his allies.
Today those consequences include violent rioters attacking our Capitol to overthrow the American democratic process.
This must end, and democracy must prevail.

It's pretty simple: "Words have consequences."  The first comment posted was a screenshot of an AOC quote regarding protests, intending to troll me.  What it said isn't as important as who posted it: a distant cousin who probably couldn't identify me in the grocery store.  Someone who never comments on anything that I post suddenly felt compelled to comment.  It's magical how that happens.

I admit I was irritated.  My first reaction I wanted to post was "You don't know me. Don't start."  But I took a few minutes and thought about a response.

The universe gave me an assist when a post on another social media platform gave me a screenshot of a tweet of 45. Because "For every tweet, there is an equal and opposite tweet." for this specific individual.  I posted it without comment.

The answer was a doctored photo of the insurrectionists that claimed they were not insurrectionists.  I did a quick google-image search, verified it was false, and deleted the comment. I also did not comment. No response from the cousin.

When Kevin discovered that his cousin had trolled me, it was over. "Unfriend him. Unfriend him now. He Does Not get to harass you."  While I appreciated the support, I was in the middle of making enchiladas.  I did unfriend him and will consider unfriending others as this dissolves into a probable civil war.  Kevin summed it up: You Don't Get to Harass People.

Then there were positive, supportive comments to that post. Then there were two VOTER FRAUD! and IT COULD HAVE BEEN WORSE/DON'T TRUST THE MEDIA  comments that have gone without response from me. I just can't with that.  I have left them up because I want the comments to die in silence.  Although I do want to post the West Wing meme: 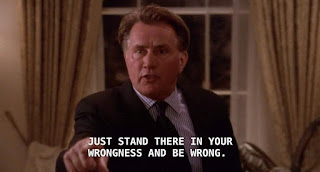 Then I received an instant message with conspiracy theory rhetoric.  I had received one, albeit benign at the time, before and ignored it.  I just can't with that now. I replied with "Hi, I'm a bleeding heart liberal snowflake. Please don't send me these. Thanks."  Their response was a simple "Okay."  That is how it is supposed to be.  I didn't berate them, I just declined the messages.  They, in turn, did the same.

Scrolling later last night, I found a min-essay stating a funny way of saying Stop Supporting the Insurrectionists.  There is ZERO way to chip in with a "But the other side does too" or that old chestnut of "It was the group that begins with "A"!!"  Because any comment will appear that YOU'RE SUPPORTING NAZIS. Brilliant.  Just brilliant.

Then I noticed another friend that dropped the Both Sides Do It, Politicians Don't Care and now they're unfollowed.

Kevin wondered why I would post at all.  My response was "Because I don't want my friends who are marginalized to think I am a coward."  Because this meme effed me up a few years ago and continues to do so: 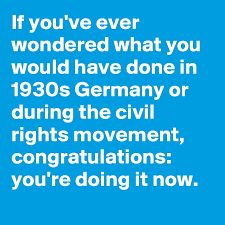 I was paying intense attention, as you'd expect, and so you got me even more with "While I appreciated the support, I was in the middle of making enchiladas." HA HA HA HA HA!!