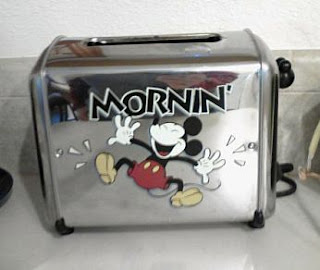 This is a word of caution: be careful what you give as presents to parents. Because someday, you may be receiving those gifts back.

When we closed the Moody house so the in-laws could come live with us, we divided their belongings amongst ourselves. As they were downsizing from a three-bedroom home to a one-bedroom home, they had to be ruthless about what they kept.

The boys were pretty good about it. If it was a gift that had been given to the parents, it went back to the giver. Thus the Bergsma prints in the closet.

We inherited a Mickey Mouse Toaster. We had given it a few years ago as a Christmas gift. Kevin was actually excited to have it. While I like the old-fashioned image of it but it wasn't my favorite. This is one of those fun times in marriages where you hold your tongue and smile.

Kevin is an early-riser. As soon as his eyes open, his brain clicks on and it's full speed ahead for him for the rest of the day. I, however, am a night owl with a dash of insomnia. So, when I actually sleep, I sleep in. Kevin is wonderful about this and tiptoes through the house to let me sleep in on the weekends.

The first weekend that we had the toaster, he decided he was going to have toast with his breakfast. He puts the bread in and goes about the business of gathering the rest of what he needed for breakfast conveniently located on the other side of the kitchen.

Now what escaped his memory is that the toaster plays the "Mickey Mouse Club" theme when the toast pops up.

Imagine him, it's 6:30 in the morning, and all of a sudden the toaster begins whistling the "Mickey Mouse Club" theme. He said he dove for the toaster and tried to get it to shut up. To no avail. Once it starts, it doesn't stop until it's played the entire tune.

At this point, the dog is intensely interested in what's going on because a) there's food and b) Kevin is excited so she must be excited. Now Kevin is trying to shut up the toaster and the dog.

And of course, the toast wasn't done. So he had to put it in again. Being the Mad Genius he is, his plan was to just unplug the toaster before the song played. This didn't work however because the toast wouldn't pop up if unplugged. The next step was to manually pop the toast up. Wrong! "M-I-C-K-E-Y M-O-U-S...."

Now the toaster isn't so great now, is it? To boot, it makes crap toast because it toasts a Mickey Mouse face on the bread.

And I slept through the whole thing. I'm a little bummed actually, I'm sure it was funny to watch.
Posted by Firegirl at 11:06 AM

Ha ha ha! I love that story, and also that the toaster toasts a Mickey Mouse face onto each slice!