My grand-nephew/godson had his sixth birthday today. There was the requisite family party which always includes my niece's friends. This has been an issue since the nephews birth as her friends are a group of people that have absolutely no idea of what's going on around them.

Today included watching a one-year-old cry it out on a small jungle gym and a toddler walk away while chasing a balloon. When my unmarried twenty-four year old nephew yells "Watch. Your. Kids!" to the crowd in general, this is bad.

Unfortunately, the little nephew has a mohawk. Today, it was burgundy colored. For whatever reason, his parents think it's cute.
It's not.
When we see him, we invariably comment "Ohhhh, what a cute little white-supremist" because that's what he looks like. He's blond and blue eyed so he looks like a little Aryan child.
It's just not good.

But here's the thing:

*pause* If you're against equal rights for gays/lesbians. Stop reading right now and join us on the next blog post. kthanks.

He seems to have gay tendencies. I am Totally Cool with that. He can be whatever he wants to be when it comes to sexual orientation. I've seen signs in other children and I believe it's a nature vs. nurture thing. I think God wired us all specifically, inclusive of sexual preferences.

Anyway...it's a contradiction. His mohawk, which I think his poor parents thinks makes him look "tough" juxtaposed with his favorite color being purple, his favorite present is always clothing. He used to play with dolls & dress-up clothes predominately. (parents discouraged it so much, I think he's given up) He's professed wanting to be a girl. Superficially, the signs are all there.

Unfortunately, his parents are not as hip & groovy as we are. They are against him being anything other than straight. Whenever the topic comes up, I am usually heard loudly saying "There's NOTHING wrong with that."

Today, he was wearing purple luau-themed sunglasses. His dad remarked that he couldn't see much through them. My adult nephew says:
"Yes he can, he sees *Fabulous*!!!" with the accompanying appropriate effeminate gestures.

I nearly inhaled a bottle of water & spat it across the table in one guffaw.

Hopefully the little nephew grows up happy, healthy and accepted with any choices that he makes. Until then, poor guy has an uphill battle. 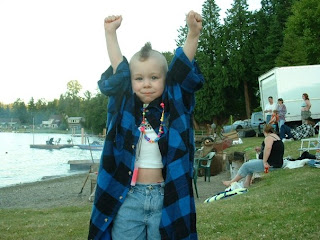 He's cute! Who cares if he's into dress up? I'm with you- as long as they grow up happy, confident, surrounded by people they love, successful at something they like to do. Happy birthday!