Your House is Wearing Blue Eyeshadow

I am watching Oprah...don't judge...She has Nate Berkus on whom I ADORE. Even though it's a repeat that I've seen before I just love him So Much. One of the funniest things he ever said was the title of this post.

Nate is talking about how we all get stuck in a rut when it comes to decorating.
He explained that while we remember to update our hair and our clothing, we often forget or neglect to update our house. I thought back to the old house and he was right, the decor was a dusty country blue. The only room that had been updated was the bathroom, which was a blackberry color. The old house was LITERALLY wearing blue eyeshadow!

I've been in the Barbie Doll Dream house for four years now so I'm looking around, judging. We chose earth tones and I think the only thing that will date this house is the forest green carpet. We chose it because the other options were blue, mauve, or brown. Not very appetizing choices.

We've been thinking about painting the living room walls a mocha brown but I just haven't committed to it yet. For one thing, I don't enjoy painting and I suck at it. For another, we have large pieces of furniture that I'd just rather paint Around than disassemble. And Mocha just seems like it will be a such a dark color. Does anyone want to share an opinion/idea?

Also I'm dying to redecorate our "Common Folk Bathroom" as Kevin calls it with red instead of the navy/green color it is now. Our beloved Target has the decor that I want, I just have to commit!

But I think I'm just going to start with taking all of the framed photographs off the book case. I'll hang them on the wall with the other photographs in the hall then figure out something else...other than trophies...to display. Maybe more books! (somewhere, Kevin just winced) 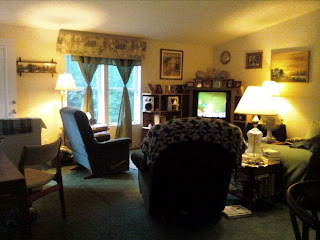 Sometimes I feel like mine is wearing bell-bottoms and leather fringe.

I actually painted the wall that you see right when you walk in...and the wall with the biggest surface space a deep mocha brown. I painted the other three walls a creamy color...and all of my moldings white. The mocha makes the room look bigger, and makes all my artwork pop. My mother was a little worried, but everyone now agrees that it looks amazing...So, you may want to pick one main wall and sit with that idea before you do the whole room...Here's my link: