One of the things that I love about the interwebs is you can learn how to do anything.  I love that I can take my phone, tablet, or laptop WITH me while I'm learning something.  I would have been a more successful student NOW than when I went to school.  Probably. Maybe.

I've learned how to cook better, clean the sink drains, clean the dishwasher filter, and an eco-friendly way to clean the oven.  (dawnsoap, baking soda, and patience/attention span that I don't possess)  Plus the whole gardening, and painting the interior and exterior of the house.

So, welcome to today's episode of What Did Surely Take Apart?

The dryer lint trap.  Not just taking out the filter and cleaning it but the shield around it. This enabled me to vacuum out the lint trap and vent with the vacuum instead of inefficiently using a dustmop or rag.

See the screw inset on the upper left hand?  There's one equidistant on the right side too but my photography skills/patience/lack of height would not allow me to capture it.  Also, the racing stripe looking thing is where the sensor lives. It doesn't come off. Don't try.  (remember this in a minute)

It was surprising how much sand, dirt and rocks were trapped in there.  I forget how grubby Kevin's clothes can be.  And dog hair.  Geez, I could make another dog.  I was disappointed that I didn't find any treasure.  Only one dime. 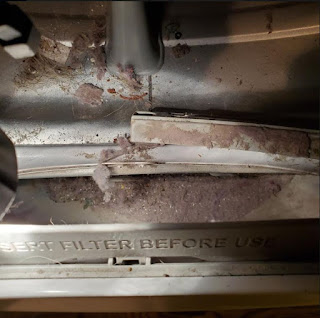 This task was relatively easy to do; it just took a screwdriver, attention span and patience.  One of which I have.

However,  I took it apart quite easily and it went back together easily.  I only made one tactical error.  Well, no, two.

When I took the trap apart, one piece stayed but was movable so I didn't worry about it.  Then while I was cleaning, I noticed two wires on said part.  This gave me pause.  Because it didn't occur to me to unplug the dryer first.  I literally thought "Good thing there's a light in here." Sigh.

LUCKILY, it was "just" wires for the lint sensory.  So, safety tip: Remember to Unplug Electronical Things Before Working on Them.  I so know better but sometimes the a.d.d. gets ahead of me.

The second error was forgetting to push down the lint trap flap before screwing the bracket back into place.  I was feeling satisfied with myself right up until I couldn't put the filter back into the dryer.  I had to loosen two top screws, fix my error, then retighten the screws.  It could have been much worse but was still a little kick to the ego.

So, things to think about:

Damp rag if you're sneezy or asthmatic (oh hai)

Lefty=Loosey, Righty=Tighty is a valuable mnemonic to remember. I don't care how old you are.

I did struggle with the putting screws back in because I had to look back toward my body from inside the dryer to see the holes.  I could start two of the screws manually but not the remaining two because they were inset.  Once they got started, then it was all good. But there was a tiny bit of frustrated cursing.

Also, if your fingers aren't communicating with your brain in situations like this, try closing your eyes to do it. I know, it's counter-intuitive but many times it works.

Stay tuned for the next episode of What Did Surely Take Apart...