No, the title is not a Big Bang Theory reference but that is usually is a safe bet with me.  It's a Howard Stern reference.  If you listen to Howard Stern, he often talks about his parents.  He does impressions of them that have left me crying laughing. He was on Stephen Colbert the other night and did the exact impression that I'm going to refer to.

One of the things that he has often referenced his mom saying is "You do too much. You're so busy."  Then he'll launch into an impression of his mother:  "Do what I do: do one big thing a day. Any more than that is just too much. It's too much."

I've thought about that from time to time.  It has seemed impossible because there's so much to do and then slowly, wow, how true it has become.  I've become a bit of a homebody.  Which would be surprising to someone who knew me back in the day.  A long time ago, I would totally be down to go to the grocery store at 11:00 pm or for a sudden roadtrip.  Or both.

For some people, one big thing a day is enough.  I used to be a Go.Go.GO! person with so many things to do and places to be.  Slowly over time, those things and places faded away.  Now I am Howard's mom.  Going to the grocery store is enough for me. To be honest, sometimes just going to work is enough for me.

There's a meme going around about "Now I understand why my parents didn't want to stop anywhere after work."  I have become that person.  It doesn't matter that the grocery store is easily accessible on the way home, I can't want to.  It's just too much, to quote Howard's mom.

I've found that if I set my intention for a task/errand on a specific day, my brain copes much better.  I have no idea why but I'm guessing it IS something of a coping technique. It allows my brain to process and prepare.  Doesn't matter, I guess, if it works.

Swistle talks about making phone calls or doing errands and other stressful things.  I think that helped in clarifying  what was happening in my brain.  I've worked in high stress jobs and had a, let me say, "interesting" life, so it makes sense that eventually the brain would be all "Nope, not doing that."

The other day I lumped a bunch of appointments into one morning.  The last one was a blood test, which that specifically doesn't bother me at all.  By that time though, I was on sensory overload.  I had all the people my brain could handle. I realized, sitting in the waiting room, which is terribly inconvenient.  And it was a fasting one so add hangry into the mix.  (I continually make good choices, really.)

I've tried to realize when I've hit the tipping point where it's just not worth fighting through it anymore.  Yesterday was one of those days: a broken computer mouse, a broken fax machine, and SusyLoudPants working next to me all day.  (Dude, I can hear her over noise-cancelling headphones.)
I realized I was tapped out and just went home. There was no recovering from it that day.

And flip it, reverse it: When you just can't want to.  I have those days too. When I can't want to do any of all that.  So, I choose one thing, focus as best as I can, and do the One thing.

So I've tried to become a little more mindful. A little more Howard's Mom.  We're hitting a busy two weeks so we'll put the theory to a real test.  Luckily, my summer schedule begins this week so work is less until August. There really is a reason that I work part-time: I am healthier by doing so.  (and LUCKY that I can, I am very aware)

Do just one thing. 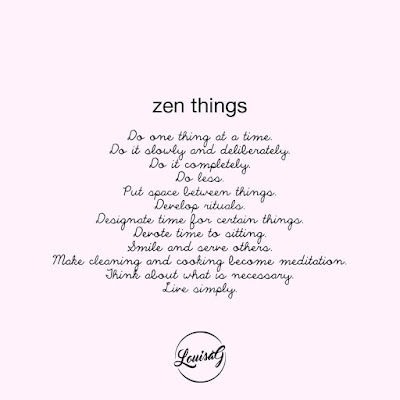