During last summer I mentioned being on the track while Kevin races.  On most of the tracks that we run it is not imperative that I am there but it's always a good idea.   My nephew, who videos every pass, is usually up there anyway but this year it needs to be up to me.  Kevin will be going significantly faster this summer so it will no longer be optional. He has to be square and in the groove. 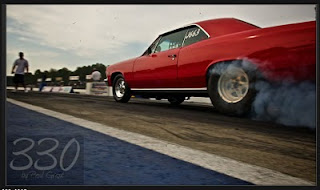 Here is a picture that shows exactly where I stand-ish.  The nephew is a little more brave than I am, he will stand in front of the car.  I love being up on the line like that, I just don't relish standing in front of a car rolling up on me.


I am not scared being up there.  Something going wrong simply doesn't occur to me.  Thoughts like that can't be allowed in my, or Kevin's, head.  Also, this style of racing is all about the routine.  Routine guarantees consistency.  One of my favorite things to do is watch how the crews and crew chiefs work together.

The other day a video was posted showing exactly what can go wrong if things aren't perfect.  I've watched it a bunch of times and I am not sure what went wrong but I can tell you what I don't like about it.  Watch the woman, she doesn't make sure he's square or in the groove.  In fact, I am not sure what her purpose was.  She is supposed to step on the track to make the first bulb light so the car is able to roll in gently.

To see what I mean about being the groove, look at the track behind the racecar.  In the reflection of the brake lights,look at the ground. Shiny is bad.  Where the scuff (darker) tracks are is where his tires have to be.  The track should be literally sticky where his tires are.  The burnout purpose is to make the tires sticky as well.  (I hate how chemistry/physics play into my hobby. I said I'd never use it in my lifetime)
?

I know, right? Freakin' scary.
We just agreed to run two series this summer, two of which Kevin can win a Wally.  I will explode if he's able to win one.  We've competed before but not at this level.  Kevin has also agreed to help run his class both in Seattle & Canada AND to continue to be our friend's crew chief.  I am going to just start napping now in hopes of banking some sleep before summer.
Mostly I am just excited though.  It should be a fun summer.  One that doesn't include anything like the video above but more like  the video below.
Posted by Surely at 8:13 PM